​On November 26th, students from Maemae Elementary School, Kamehameha School, and Pearl Harbor Elementary School participated in the first El Deafo Semi-Final match.  The top 15 finishers will compete in the Finals match in December.  Six students from PHES qualified and will play in the finals in December.
Link to the recording of the game: ​https://youtu.be/t9F8Ql1ZL68

On December 7th, students from four schools participated in the Roller Girl Kahoot Championship game.  All of the students qualified during one of the Semi-Final matches in November and December.  The scores were really close and the top 3 finishers will receive a certificate and prizes at the 2018 Nene Award Ceremony.  A PHES fifth grader was the game show host and facilitated the game.

The third Nene Jeopardy Video Conference was filmed on April 6, 2017.  Two schools competed: Maemae Elementary and Pearl Harbor Elementary.  Sacred Hearts hosted the game based on the 2017 Nene Suggested Reading list.  The competition was fierce at the end of the regular round, Maemae had 2000 points and PHES had 2700 points.  After Final Jeopardy, PHES was announced the winner with a total of 3100 points and Maemae finished with 2500 points.  Everyone displayed great teamwork and cooperation in answering the questions.

For recording of game

The second Nene Jeopardy Video Conference took place on March 2, 2017. Three schools participated: Aliiolani Elementary, Salt Lake Elementary, and Kamehameha Schools.  Pearl Harbor Elementary was the game show host.  It was exciting having three teams compete this time and all of the regular game board questions were answered correctly by all of the teams. The game was very close going to to Final Jeopardy, Aliiolani and Salt Lake were tied with 2400 points and Kamehameha had 2200 points.  The game ended with Salt Lake winning with 4800 points, second place going to Aliiolani with 4200 points, and third place to Kamehameha Schools who unfortunately finished with 0 points.  Congratulations everyone for a game well played!
For the recording of the game

We had our first Nene Jeopardy Video Conference on February 21, 2017.  Sacred Hearts Academy and Kahului Elementary competed to answer questions based on the 2017 Nene Suggested Reading List.  This was the first time in the history of Nene Jeopardy that a neighbor island school participated.  Three Pearl Harbor Elementary sixth grade students facilitated the game from room 31.  The students worked collaboratively to successfully host the game.  The Final score was Kahului- 1300 points, Sacred Hearts- 3300 points.  Great work everyone!
Recording of game: Nene Jeopardy Video Conference #1 2017

On the morning of Feb 2nd, students from Mrs. Ingel's Kindergarten class participated in a Google Hangout with students from Sandy Springs Friends School in Baltimore, Maryland. Students shared about the weather, PHES classrooms, PHES library, and uses for leaves in Maryland and Hawaii.  Room 17 learned a lot about snow and appropriate clothing to wear.  The Maryland students learned about our sunny weather and the use of ti leaves to make hula skirts and lau lau.  This has been an ongoing project between the two schools this school year.  We look forward to more collaboration between the schools in the future!

On Dec 3rd, fifth and sixth graders in the Enrichment class videoconferenced with students from Pearl City Highlands Elementary.  Students shared the games they created in conjunction with the Rising Tigers program.  Our students gave and received feedback on their games and had fun learning about each other's projects.

Students participated in an online Kahoot! game based on the 2015 Nene Award winning book, "Wonder" by RJ Palacio. The top 10 students are now qualified to play in the finals scheduled for December 15th.

PHES has a team of 5th and 6th graders scheduled to compete in another semifinal match on December 14th.  Hopefully most of the team will qualify for the final game.  Good Luck!

On December 15th, nineteen students from Aiea Elementary, Maryknoll School, Pearl City Highlands Elementary, Kaneohe Elementary, and Pearl Harbor Elementary played in the Finals for Wonder Kahoot! based on RJ Palacio's book.  These are PHES students in the top 10 from this game.
Congratulations!

Sending PHES textbooks to the Philippines

Sixth grade classes (rooms 31 and 32) shared Brain Hive eBooks with the Kindergarteners on April 7th.  Students were reminded how to access the Brain Hive website and to model good reading and library behavior before the Kindergarteners arrived.  The older and younger students were then randomly paired up in the library and introductions were made between the Reading Buddies.  Two or three Brain Hive eBooks were then shared and discussed by each group.  Everyone enjoyed interacting with each other and can't wait to try it again one more time in May! 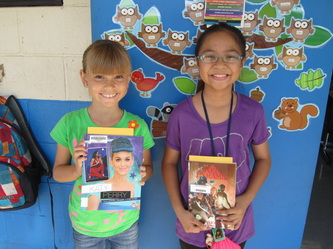 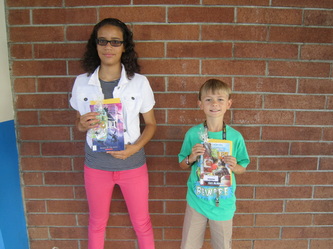 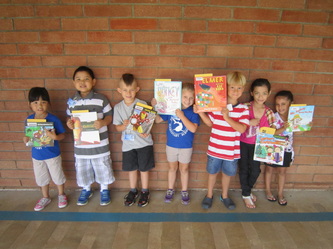 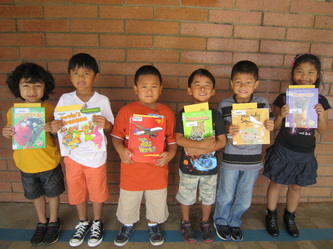 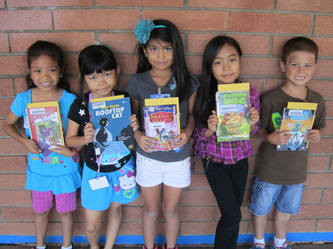 Thank you to the families who donated $10 to the PHES Library to purchase new books.  The names and birthdays of participating students will be placed in a new book for the library.

The PHES Library's Book Fair was held from Oct 26-30th and was a big success!  Parent Night was on Friday Oct 26 in conjunction with Pumpkin Carving Night when students wore their Halloween Costumes.  Thanks to our Parent Volunteers, Military Volunteers from PSD Pearl Harbor and Makalapa Clinic.

May 17, 2012
The top student from each homeroom in grades 2-6 was invited to a luncheon in the library to celebrate their success in taking AR Quizzes this year.

Thank you to all the families who made monetary donations to PHES library.  The name and birth date of the student donors have been placed in a new book.